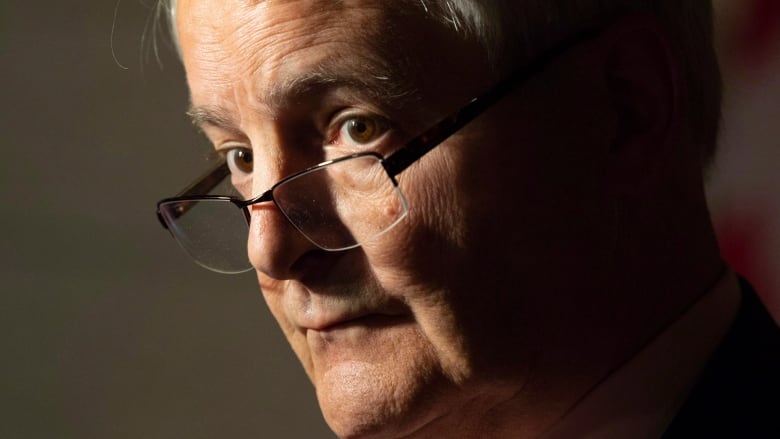 Minister of Transport Marc Garneau listens to a question following a news conference in Ottawa. Garneau said he would not hesitate to fly on a Boeing 737 Max 8. (Adrian Wyld/Canadian Press)

Transport Minister Marc Garneau says it is simply too soon to say what caused a brand-new Ethiopian airliner to crash — and until investigators can pinpoint what caused the deadly incident, dozens of Boeing 737 Max 8 planes will be free to fly in Canada.

Speaking to reporters in Montreal, Garneau said it would be “premature” to ground all 41 of those planes currently owned by Canadian air carriers even though it’s the second such deadly crash for a Boeing 737 Max 8 model in less than six months.

When asked about the crash of a similar plane in October 2018, Garneau said Canadian regulators don’t want to “jump to conclusions” despite the similarities between the Indonesian and Ethiopian incidents.

“I would, without any hesitation, board an aircraft of that type at this particular time. I’m reassuring Canadians that we will determine what the cause was [of the Ethiopian] crash,” he said. “This plane already has millions of miles of flying.”

Garneau said that because the “black box” flight recorder and other critical sources of flight data already have been recovered at the crash site, an investigation can be done relatively quickly. 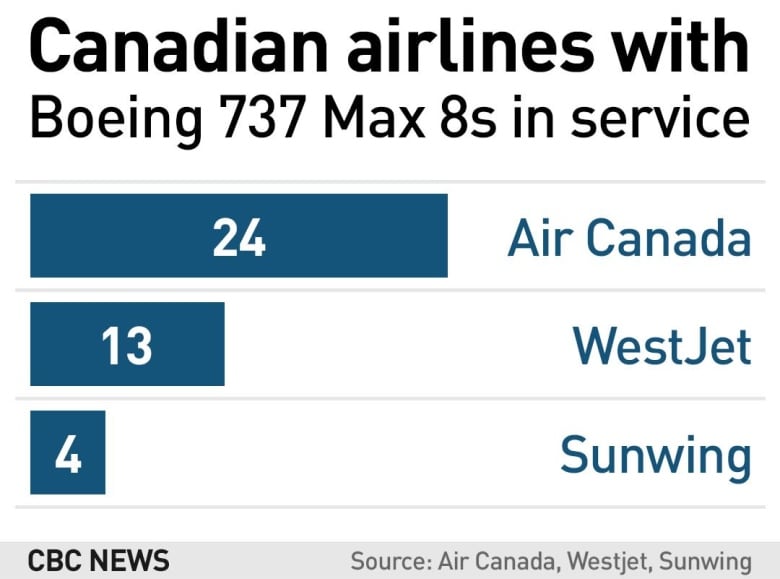 The crash killed all 157 people on board, including 18 Canadians.

Transport Canada said it’s taking “all the necessary actions to ensure the safety of our skies.”

“The process of certification of the Boeing 737 Max [8] aircraft was led by American authorities,” a spokesperson for Garneau said in an email to CBC News. “Transport Canada officials are working with their American counterparts in order to assess next steps.

“The United States National Transportation Safety Board is gathering all the available information and a team was sent on site. Any decision taken will be based on science and in order to maintain the highest levels of safety.”

Garneau said Monday that if investigators are able to point to a problem unique to the 737 Max 8, he would “not hesitate” to take action, including temporarily grounding those planes from Canadian airspace.

The 737 Max 8 model is one of the latest versions of the world’s most popular aircraft, used by airlines the world over. Thousands of 737s have been produced since the first of its kind was introduced by Boeing in the mid-1960s.

Ethiopian Airlines and all Chinese airlines have grounded their Boeing 737 Max 8 planes indefinitely in the wake of the crash, which occurred shortly after takeoff from Addis Ababa Bole International Airport, en route to Nairobi.

However, Canada’s two largest airlines say they are confident in the safety of the aircraft.

Calgary-based WestJet said it is “working with Boeing to ensure the continued safe operation of our Max fleet,” which includes 13 Max 8s. 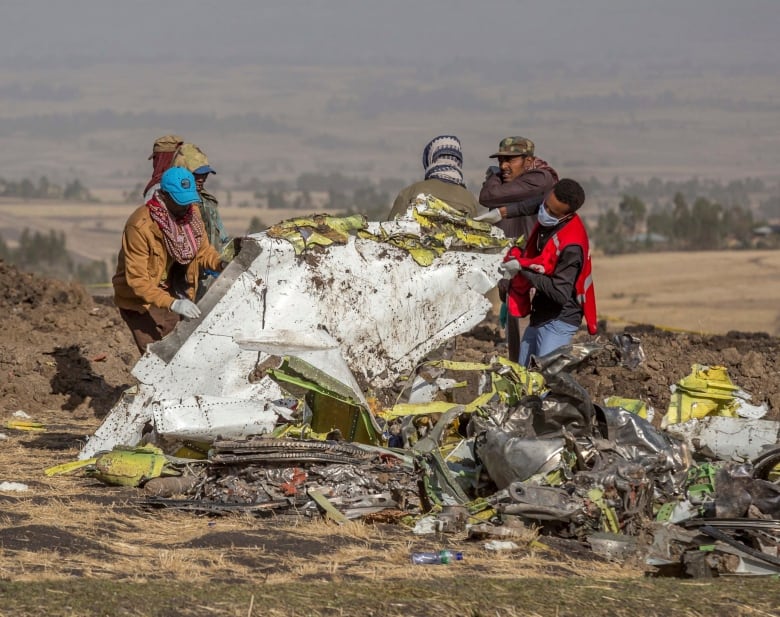 Rescuers work Monday at the scene of the crash near Bishoftu, south of Addis Ababa. All 157 people aboard were killed. (Mulugeta Ayene/Associated Press)

“We have flown five different variants of the Boeing 737 since 1996, and the fleet currently operates around 450 safe daily B737 departures,” WestJet spokesperson Morgan Bell said in a statement. “We are monitoring the situation closely and will not speculate on the cause of the incident.”

The Air Canada Pilots Association, the union for Air Canada and Air Canada Rouge pilots, sent out a statement urging Transport Canada “to take proactive action to ensure the safety of the Canadian travelling public.”

Ethiopian Airlines said Monday that investigators have recovered the plane’s flight data recorder and cockpit voice recorder and were trying to determine the cause of the deadly crash involving a new aircraft model touted for its environmentally friendly engine.

It was not clear what caused the plane to go down in clear weather, but the pilot sent out a distress call and was given clearance to return, the airline’s CEO said on Sunday. 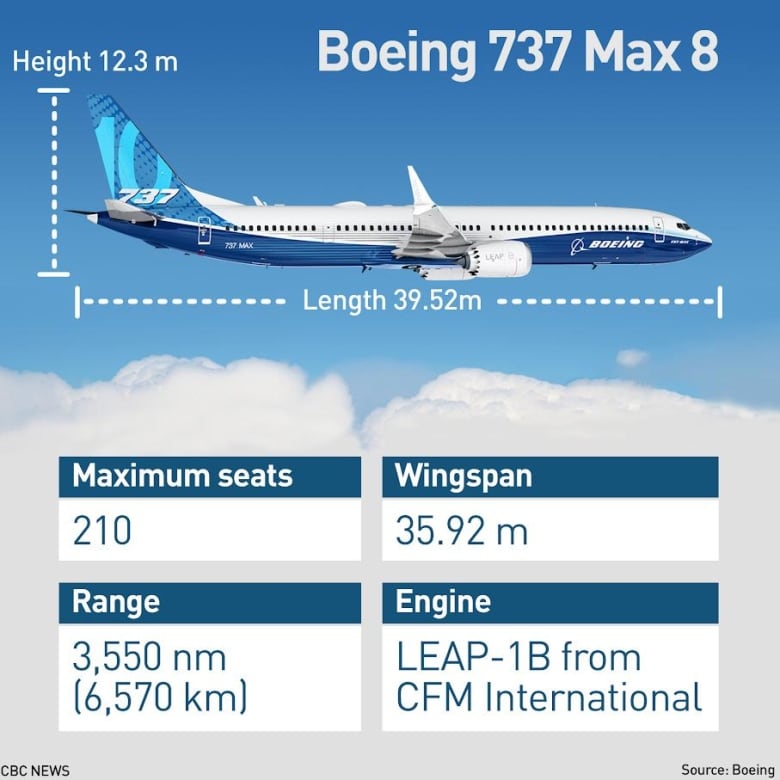 People from 35 countries died in the crash. Among the 18 Canadians killed were a Carleton University professor and a mother-daughter pair from Edmonton.

Prime Minister Justin Trudeau sent condolences via Twitter to the families of those lost in the crash, as did Foreign Affairs Minister Chrystia Freeland.

Devastating news from Ethiopia this morning. Our thoughts are with all the victims on flight ET302, including the Canadians who were on board, and everyone who lost friends, family, or loved ones. Canadians in need of assistance, contact sos@international.gc.ca or 613-996-8885.

Question around the Max 8

The crash is likely to renew questions about the 737 Max 8, the newest version of Boeing’s popular single-aisle airliner, which was first introduced in 1967 and has become the world’s most common passenger jet.

The accident was strikingly similar to the crash of a Lion Air jet of the same Boeing model in Indonesian seas in October, which killed 189 people.

Indonesian investigators have not determined a cause for that crash, but days after the accident, Boeing sent a notice to airlines saying that faulty information from a sensor could cause the plane to automatically point the nose down. The notice reminded pilots of the procedure for handling such a situation.

The Lion Air cockpit data recorder showed the jet’s airspeed indicator had malfunctioned on its last four flights, though the airline initially said problems with the aircraft had been fixed before it left the Indonesian capital of Jakarta.

Safety experts cautioned against drawing too many comparisons between the two crashes until more is known about Sunday’s disaster.

The Ethiopian plane was new, delivered to the airline in November. The jet’s last maintenance was on Feb. 4 and it had flown just 1,200 hours.