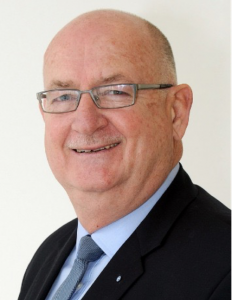 Mike was born in Cape Town in 1953 and after completing compulsory National Service in 1970 started his career in the Insurance industry whilst studying towards a Business Management qualification in 1971.

An opportunity to transfer to Johannesburg on promotion arose in early 1979 where he joined SA Eagle Insurance in a junior management role focusing on both operational and strategic business development roles.

He was subsequently appointed to various senior management roles within the Company culminating in his appointment as the National Head: Global Brokers and Banks which he held until his recent retirement in May 2017. In this role Mike was responsible for the implementation of a global strategy designed to leverage opportunities to develop a portfolio of multi-national businesses in Africa.

A strong people orientation coupled with a keen interest in all aspects of business resulted in his involvement in a number of community based organizations including state sponsored Care facilities, most notably the Avalon Home for the Physically Handicapped where he chaired the Board of Trustees from 2012 to 2015. Mike served on the Board of Trustees of the Zurich Pension Fund from 2010 to April 2017 when he stepped down in view of his pending retirement in May. He remains a Director on the Swiss Chamber of Business.