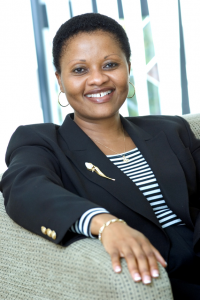 Ms Gosa is an entrepreneur founder of Akhona Group with investment interests in real estate as well as industrials sectors. She is a former Investment Banker with Investec Bank, and is also one of the founding Commissioners of South Africa’s first National Planning Commission (NPC), a Presidential appointment. The NPC drafted the country’s current economic blueprint, Vision 2030 as well as National Development Plan.

She currently is a member of the Advisory Board of the Mining Indaba; sits on the Boards of JSE listed companies ArcelorMittal SA, Investec Asset Management, as well as Hulisani. Her previous Board positions include AON SA, Broll Property Group, Investment Committee of the National Empowerment Fund, SABC as well as the Small Enterprise Development Agency

She has received numerous awards including the Black Management Forum Gauteng’s Achiever Award; The Association of Black Securities and Investment Professionals Achiever Award, the first runner up to the Women’s Property Network’s Excellence Award, as well as nominated in the Most Powerful Women in Business and Government Awards. She has also been involved with numerous charities that focus in ensuring access to education for children from disadvantaged backgrounds including the Students’ Sponsorship Program.