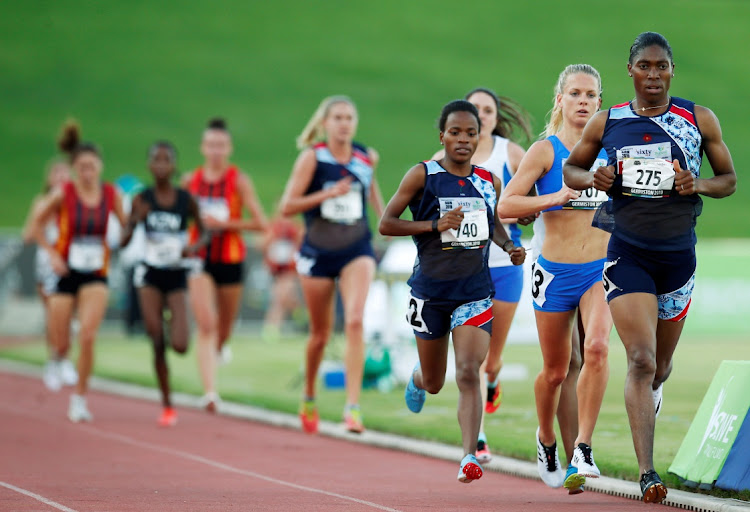 Caster Semenya taunted the world athletics authorities she is battling in court by storming to victory in the 5,000m at the national championships in Germiston on Thursday evening.

The Olympic and world 800m champion, who has enjoyed varying degrees of success at the 400m and 1,500m, has challenged the IAAF’s proposed regulations for athletes with hyperandrogenism competing in her three main events.

The Court of Arbitration for Sport in Switzerland is expected to announce its verdict by the end of April.

The IAAF did not target the 100m and 200m sprints, nor races longer than the 1,6km in its bid to curb SA’s most successful athlete of all time, so Semenya stepped up to the 5,000m to take on defending champion Dominique Scott and even Kesa Moletsane, winner of the national 10km cross-country trials in January, and she triumphed convincingly.

Semenya, comfortably the fastest in the 1,500m heats earlier in the day, took the lead early on the fourth lap and when Scott attacked at the bell, Semenya responded with a huge kick to win easily in 16min 05.97sec.

Semenya had not run a 5,000m before in 2019 , but her strategy confounded Scott. “I don’t know what my coach is going to say to me. I didn’t expect Caster to take the lead like that.

“We had a couple of game plans, but neither included her going to the front. I didn’t expect her to push the pace from that early on, I thought she was just going to sit and kick. I had some tactics to do what she had done.

“It felt like she was pressing … so I didn’t feel like I needed to go in front of her because I don’t know how much more I could have pressed it myself. I was just hoping she was wearing herself out.”

But how competitive can Semenya be if she were to focus on the 5,000m internationally, where the top runners go sub 14:30?

“Honestly, I have no idea,” said Scott, who was scheduled to return to the US where she will run her first 10,000m since the 2016 Rio Olympics.

“Before today I probably would have said no. It’s hard to compare a 5km at altitude to a 5km at sea level … but I think she’s an amazing runner and I don’t think there’s any limit on what she can do.”

Given how easy Semenya looked over the first 11 laps, it is tempting to believe she can go a lot faster.

Semenya’s performance was one of the highlights of the opening day of the South African showpiece, where veteran sprinter Simon Magakwe won his eighth SA 100m crown 10 years after lifting his first.

“I’m very happy,” said Magakwe, who is confident of going faster, especially when he migrates for the European summer. “The way I run, I’m capable of doing that and it’s coming, okay. The reason why I’m not running sub-10 now is I’m putting too much pressure on myself and people are expecting that.”

Wayde van Niekerk withdrew from the 400m heats because of the cold weather over the past few days.

“I woke up a bit tight and uncomfortable and decided not to take any risks. I feel in good shape and I feel capable of competing with the guys, but rather not risk anything. There’s a long year waiting for me.”

The championships were disrupted by a thunderstorm in the morning, and then again by a power outage in the evening.