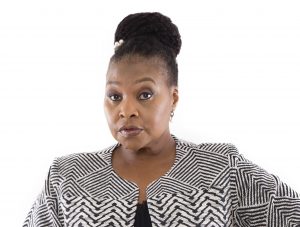 Dubbed the “Princess of Africa,” Chaka Chaka has been at the forefront of South African popular music for 30 + years. Born in 1965 in Soweto, She was the first black child to appear on South African television.  At the age 19 she released her debut album “I’m in Love with a DJ,” which sold 35 000 copies in a week and the song “Umqombothi” was featured in the opening scene of the 2004 movie Hotel Rwanda.

As her music career took off, so did her humanitarian work. Throughout her career, Chaka Chaka has used her music to raise awareness of and empathy for challenges facing people across Africa, such as poverty education and disease.

Chaka Chaka has served as a Goodwill ambassador for UNICEF and the Roll Back Malaria Partnership for the past 12 years, advocating for malaria prevention, education, and treatment. In addition to campaigning for the medications and bed nets that will help end malaria, Chaka Chaka has worked as a Global Fund Champion to raise international funding to fight AIDS, TB and Malaria and ensure all children are reached with vaccines as a GAVI Champion. As a MDG Envoy for Africa she worked to inspire African leaders and decision makers to increase domestic funding for health.

The Princess of Africa Foundation, which is a member of ACTION a partnership of locally-rooted organizations around the world that advocate for life-saving care for millions of people who are threatened by preventable diseases.

In 2006, Chaka Chaka founded the Princess of Africa Foundation, which was established to complement her work as Goodwill Ambassador and aims to carry out community and advocacy work.

Chaka Chaka has performed for many world leaders, including the Queen of England, Nelson Mandela, Former U.S. President Bill Clinton and shared the stage with many great musicians such as Bono, Annie Lennox, Beyoncé, Miriam Makeba and Youssou N’dour.

Chosen by Nelson Mandela to be his first ambassador for the 46664 Campaign, Chaka Chaka has been ranked by Forbes Magazine as one of the top ten most influential celebrities in Africa, and named one of the Top 100 Heroes of South Africa by the City Press newspaper and one of South Africa’s 21 Icons, Yvonne is the first African woman to have been awarded the Crystal Award by the WEF World Economic Forum, in Davos in 2012 recognising her Humanitarian work. Yvonne always makes time to motivate, inspire, and educate everyone she meets and is always learning from others.

Over the years Yvonne has teamed up with artists from all over the world to record music to raise public awareness on a number of issues.